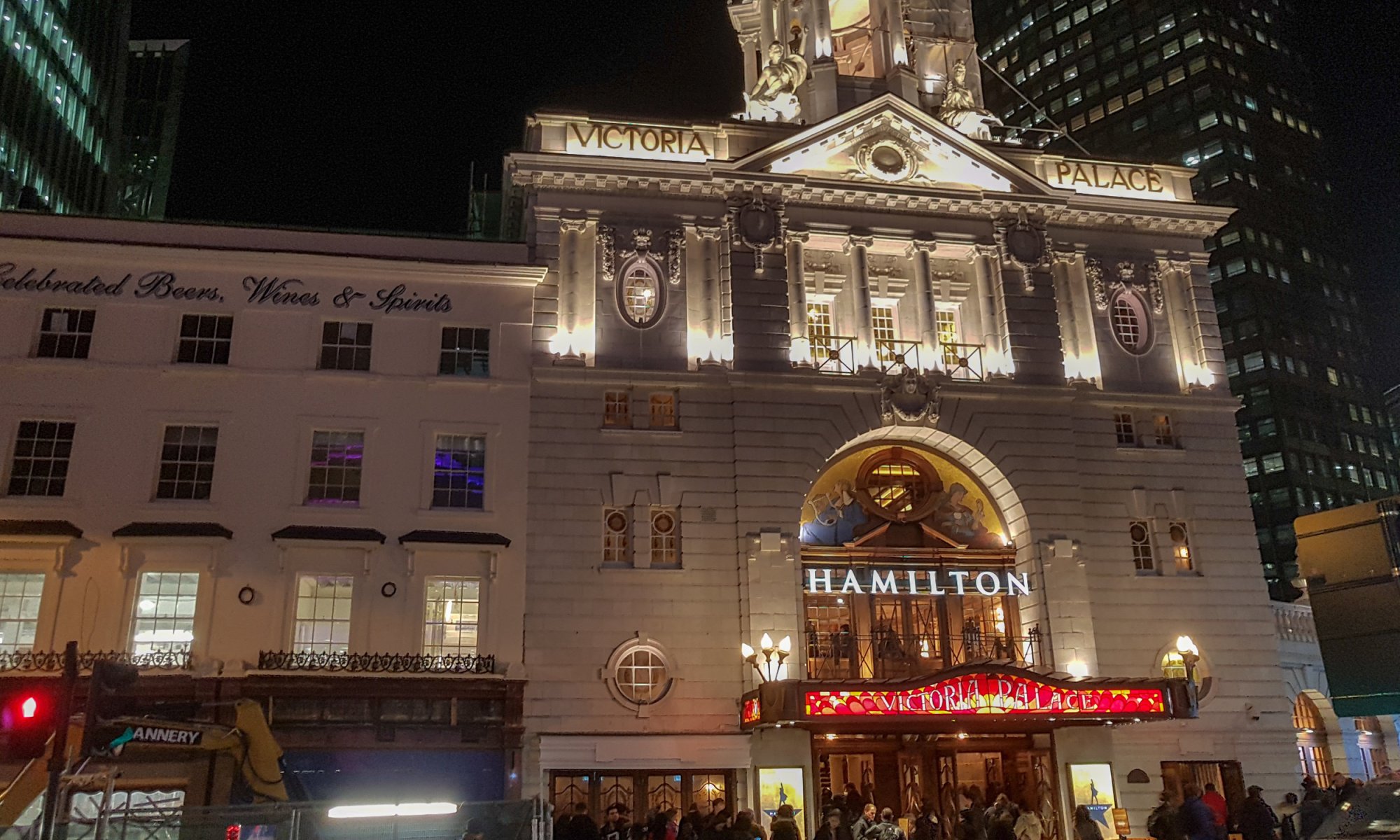 I had the incredible opportunity to watch Hamilton at Victoria Palace Theatre over the weekend. I’ve been struggling to find the perfect word that describes the overall experience, it’s just impossible. There are no words that can capture the beauty of this play. It was cleverly written, amazingly performed and sung. I cried so many times throughout, not just from the story but also because of how overwhelmed I was. I’ve been wanting to see Hamilton since it first came to London, imagining the scenes in my head over and over, and to see it come to life was just incredible.

I’ve listened to the soundtrack more times than I can count, and each song is detailed and helps tell the story. So the fact that there are no spoken words in the play wasn’t that surprising. However, most of the time each song was set in a different place, or time, and with different characters. So to jump straight into the next song was impressive. The play is physical theatre, which by definition means ‘a form of theatre which emphasizes the use of physical movement, as in dance and mime, for expression’, so there was only one set and furniture like writing desks, chairs, even the set of Alexander and Eliza’s wedding, was brought in during the songs as if they were dance moves. The actors managed to smoothly move throughout the play without error, as did the dancers, who were on stage for the majority of the play.

Another technique that was used in the play was a rotating stage. The middle of the stage would rotate, sometimes in different parts, and added to the story. One of the highlights was ‘Satisfied,’ where Angelica tells the story of ‘Helpless’ from her perspective, revealing her love for Alexander. Angelica stood in the middle of the stage, and the outer part started to rotate along with the rest of the cast, acting as if someone genuinely pressed a rewind button on a remote controller. This transition happened over only a couple of seconds, and it was flawless. ‘Satisfied’ is one of my favourite songs in the play, and Allyson Ava Brown performed it beautifully. The most moving part of the song was during the last rendition of the chorus, when everyone around Angelica is celebrating the wedding while she stands in the middle, her heart breaking in front of us.

Many other songs amazed me in the play, more so than they did when just listening to the soundtrack. King George’s songs came to life when performed in person. Before the play, I didn’t enjoy his songs as much and often skipped over them. However, Jon Robyns performed them in a way that was so sarcastic it was hilarious.

‘The Reynolds Pamphlet’ also stood out for me. It was already one of my favourite songs on the soundtrack, and the way it was performed on stage made me love it anymore. What stuck in my head was the image of Alexander standing in the middle while the characters flung their copies of the pamphlets at him, leaving him standing amongst the pile, while he tried to speak over them all, singing the words ‘At least I was honest with her.’

One word that I’d use when describing the play is powerful, and that is because of some of the lines that are spoken. ‘Death doesn’t discriminate between the sinners and the saints, it just takes, and it takes’ is one of my favourites, along with ‘Dying is easy young man, living is harder.’ I just realised while writing this that both of these sentences are about death, so here’s on that doesn’t focus on dying: Angelica’s ‘At least I keep his eyes in my life.’

It wasn’t just the lines that hit me. Philip’s death had me in tears, even though I knew it was coming. I was crying from the moment Eliza arrived at his hospital bed and throughout ‘It’s Quiet Uptown.’ And then during ‘Hurricane’ where Alexander gives his last monologue before his death, followed by Eliza’s verses during ‘Who lives, who dies, who tells your story.’

I’ve only seen a few musicals, but Hamilton is one of the best that I’ve seen. After it ended, I spent the rest of the evening and the next day just replaying it all in my head, still in awe. If you ever have a chance to go and see this play, do it. You won’t regret it.